We’re supporting 15 youth from seven provinces and a territory taking the Canadian government to court for violating their charter rights by perpetuating climate change.

Fifteen kids and teens. Seven provinces and a territory.

The case — La Rose et al. vs. Her Majesty the Queen — argues these youth are already being harmed by climate change, and the federal government is violating their rights to life, liberty and security of the person under section 7 of the charter and failing to protect essential public trust resources. The youth also allege that their government’s conduct violates their right to equality under section 15 of the charter, since youth are disproportionately affected by the effects of the climate emergency.

The climate crisis is the biggest threat humanity has ever faced. I will not accept the global suffering of future generations. That is why I act.

A key step in the global youth climate movement

This may be the first lawsuit of its kind in Canada, but legal challenges around the world are aimed at getting governments to act on the climate crisis and protect the well-being of people now and into the future. These 15 plaintiffs are part of a global movement of young people holding their governments accountable to reduce greenhouse gas emissions and safeguard their constitutional rights. Similar cases are pending in other countries, including Juliana vs. United States.

Ranging in age from 11 to 20 and representing seven provinces and a territory, the plaintiffs are as diverse as they are committed to climate action.

All have suffered individualized harms from the effects of the climate crisis, and all have been working to advance climate solutions in their own communities. 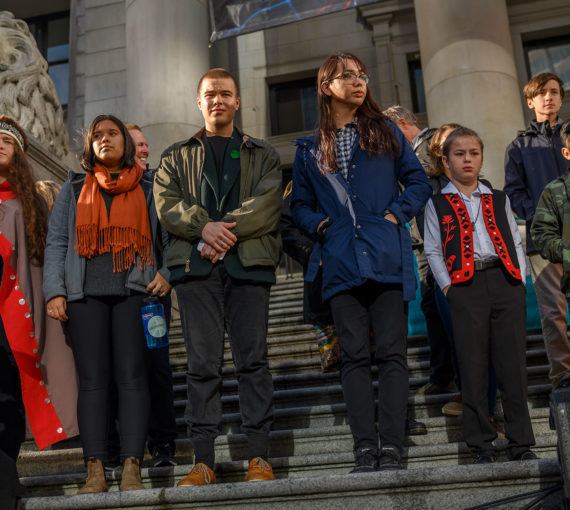 Is it really a climate emergency?

The leading international body on climate science — the Intergovernmental Panel on Climate Change — has given the world just over a decade to reduce global emissions by half to avoid irreversible, catastrophic climate change impacts. In Canada, climate change effects are already being felt in the form of heat waves, sea level rise, glacier retreat, melting permafrost and wildfires. Despite these harms, Canada’s government is actively contributing to the climate crisis by continuing to support and promote fossil fuels. And emissions continue to rise…

The articles below dig deeper into the details of the climate emergency, how it affects people and the planet and what we can do about it. Some things are certain: it’s real, it’s here now and it’s not too late to act — but there’s no time left to waste. What is climate change? For half a century, the federal government has known that climate change and fossil fuel use threaten the life and personal security of people in Canada. Yet, we continue to take actions that harm our children and those to come.

In addition to violating charter rights, successive federal governments have violated the Canadian public trust doctrine. This doctrine is much older than the charter. It says Canada has a legal responsibility to protect vital, commonly held natural resources that citizens depend on and will depend on in the future. This includes the atmosphere, oceans and shorelines and the northern permafrost. The doctrine guarantees these public resources will be held in trust for future generations.

Not only has the federal government actively contributed to climate change, it has also failed to exercise its jurisdiction to prevent greenhouse gas emissions that threaten our safety. It continues to subsidize the fossil fuel industry and maintains direct control over fossil fuel transport, export and import. The government has also failed to meet all five emissions-reduction targets it has set.

This lawsuit is against the federal government, not against any specific province. While several other lawsuits are being filed to address climate change, this is the only one against the federal government brought by plaintiffs from across the country, and the only one that seeks to hold it accountable under the charter and the Canadian public trust doctrine. This is the only lawsuit that young Canadians have brought to challenge the federal government’s systemic actions in contributing to climate change. It asks government to prepare a plan to transition us away from fossil fuel reliance in ways that are credible and based on the best available science.

If the case is successful, the Federal Court of Canada will order government to develop and implement a science-based climate recovery plan consistent with what scientists say is needed to stabilize the climate system.

The goal is to reduce global atmospheric carbon dioxide levels from 410 to 350 parts per million or lower by the end of the century, by reducing Canada’s emissions and increasing carbon sequestration.

It’s not too late. Scientists have identified pathways to restore the climate system. But the federal government is not following this prescription and is promoting and continuing fossil fuel use.

This case is a Canadian-led effort to protect the Charter rights of young Canadians who are being adversely affected by climate change impacts. They are represented by a legal team from Arvay Finlay LLP and Tollefson Law Corporation. The David Suzuki Foundation is the lead Canadian environmental non-governmental organization partner, while the Pacific Centre for Environmental Law and Litigation (CELL) is an educational partner, using this lawsuit to train the next generation of public interest lawyers. We are extremely fortunate and grateful to count on guidance and technical support from Our Children’s Trust, based on its deep experience in youth climate litigation. (Notably, it helped spearhead the Juliana vs. United States youth climate lawsuit.)

The David Suzuki Foundation is grateful to support such an important case, its legal framework, its plaintiffs and the message it communicates.

Let these 15 courageous young plaintiffs know you stand with them! The federal government wants to have the La Rose youth climate lawsuit thrown out, but these young people deserve to be heard.

From the media centre

Read our latest statements released to the media related to La Rose et al. vs. Her Majesty the Queen.